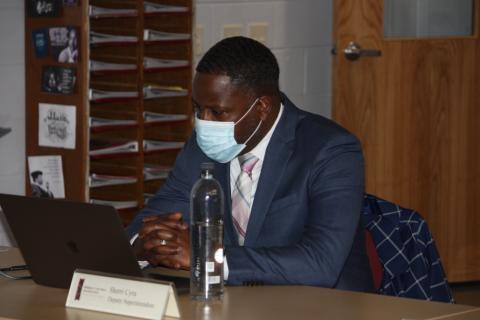 Director of Equity and Student Achievement Percy Brown Jr. provided an update on planning for summer school at the Board of Education regular meeting at Kromrey Middle School on Monday, April 12.

Superintendent Dana Monogue noted the District will use approximately $720,000 that it received from ESSER 2 funds to offer a District-wide summer school program for students in grades 1-8 for the first time. The approach in Year 1 will be targeted and include fewer students this year in part because the amount of funds the District received ended up being nearly $2 million less than originally anticipated.

"It is impossible to offer summer school to 7,000 children with that amount,'' Brown said.

Brown noted this year's program, which will be called Summer Academy, will serve students who have struggled academically over the past year and will include English Language Learners and students with disabilities. He emphasized the District is using data to determine which students will be invited and that MCPASD will be offering invitations in the near-future. He expects some students to decline to participate and if that happens other students will be invited.

The program will be offered at Kromrey on Monday through Thursday from 8 a.m. to noon starting June 21 and running until July 29. Kromrey Dean of Students Brandon Tewalt and MHS Dean of Students Jordan Roupp will serve as the administrators for the program and they are in the process of hiring teachers. The content will be highly engaging and include literacy enrichment and Tewalt and Roupp are working with instructional coaches and reading specialists to determine what will be included.

Students will be able to access the free summer food program and transportation will be provided. The teacher-to-student ratio will be about 10-1 to make it enticing to staff, Brown said, adding he expects to expand the program in the next  two years. The program is also working closely with the Middleton Recreation Department, which is also running programming out of Kromrey as that may afford students additional opportunities.

A virtual option won't be offered in Year 1 but will be considered moving forward, Brown added.