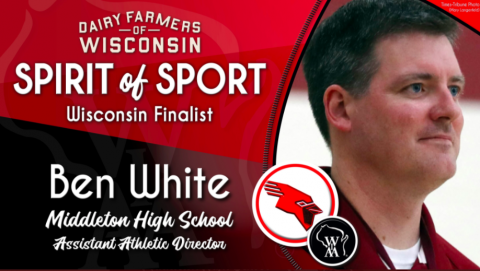 Ben White, the MHS associate athletic director and activities coordinator, was recently a finalist for the Spirit of Sport Award presented by the WIAA and the Dairy Farmers of Wisconsin.

Shawano's Abigail Tuma was named the 2021 Wisconsin and Section 4 recipient of the award.

White moved into his new role at MHS last year after at a 19-year stint as the boys volleyball coach. He was diagnosed with Diffuse Large B-Cell Lymphoma in September 2019.

White endured a year-long treatment for cancer, which is now in remission. MHS athletic director Jamie Sims praised White for his “resiliency and dedication to excellence for all students and staff.”

One month prior to his diagnosis, White’s friend and former MHS athletic director Bob Joers was diagnosed with pancreatic cancer. The two battled the disease together. Joers passed away in May 2020.

Tuma, a senior on the Hawks girls volleyball team in 2020, was diagnosed with Medulloblastoma, a type of brain cancer, in the fall of her sophomore year.

The other finalists for Wisconsin's nomination for the award included Jasmine Bertschy of Valders High School and Michael Krouser of Milwaukee Juneau High School (MacDowell Montessori).

The Spirit of Sport Award was created by the NFHS and adopted by the WIAA in Wisconsin and sponsored by the Dairy Farmers of Wisconsin. The award recognizes individuals who exemplify the ideals of the spirit of sport that represent the core mission of education-based athletics.

The National High School Spirit of Sport Award was started in 2008. Including this year, 12 individuals and three teams have been chosen as national award recipients.