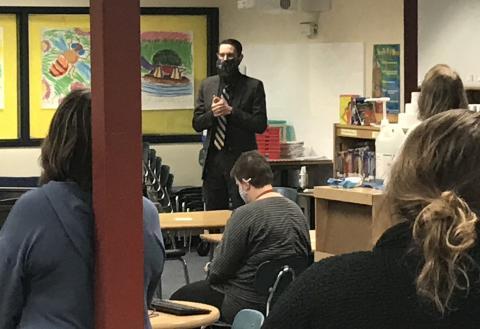 Elm Lawn principal Robert Schell announced that he has accepted the principal position at St. Maria Goretti Catholic School in Madison, effective at the end of the 2020-21 school year.

Schell was named principal at Elm Lawn in August 2013. He has worked in the District since 2002. His previous 11 years were spent as a teacher at Sunset Ridge, Glacier Creek and Kromrey.

The District will begin a search for his replacement immediately. Deputy Superintendent Sherri Cyra met with Elm Lawn staff on April 5 and noted the position will be posted through April 19. The District plans to include engagement opportunities for staff, students and families with the final candidates and hopes to have a new principal named by early May, Cyra added.

More information about opportunities for the school community to be involved in the process will be shared at a later date.

"I find myself with an opportunity to spread my eagle wings in a direction that will provide more time and focus on my family,'' he said. "I get to be my Schell kids' principal! I am truly thankful for MCPASD making me into who I am today, both as a professional and as a person. ... I have learned so much from ALL of you, and feel lucky to have worked alongside such dedicated and visionary leaders.''

Elm Lawn has consistently ranked among the top elementary schools in Dane County and Wisconsin under Schell, according to Niche.com. In the most recent rankings, Elm Lawn was ranked third among all Madison area public elementary schools and 12th in the state.

Elm Lawn has also consistently ranked among the best elementary schools, according to the Wisconsin Department of Public Instruction School Report Cards. Elm Lawn significantly exceeded expectations, which is the highest category, when the most recent report cards were released in 2019.  Only 318 K-12 schools out of more than 2,100 rated in the state significantly exceeded expectations.

"This is a great opportunity for Bob and his family and we wish him all the success in the future,'' Superintendent Dana Monogue said. "We will miss his infectious positive energy.''