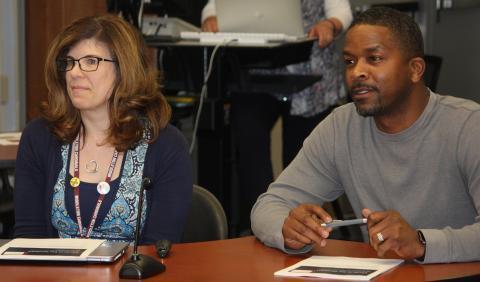 Director of Elementary Education Rainey Briggs has been named the new superintendent for the Baraboo School District.

The Baraboo School Board met on Monday, March 15 and offered the position to Briggs. He accepted later in the week and the announcement was made on Thursday, March 18. He will take over as superintendent on July 1.

“Throughout my interview process, it was very clear that Baraboo has a tradition of excellence, which is due to all the hard-working staff members and this great community. I hope to continue this great tradition and maintain and grow a rigorous teaching and learning environment where all students can flourish,” he told the Baraboo News-Republic.

Briggs has seven years of teaching experience and nine years as an administrator. He joined MCPASD in 2016 after previously serving as a principal in the Sun Prairie and Madison Metropolitan districts. He will replace Lori Mueller, who announced in November she will step down at the end of this school year to move to Florida and start a position with a private consulting firm.

Briggs has a bachelor's degree from Minnesota State-Mankato and a master's degree from Viterbo.  He earned his doctorate from Edgewood College in 2017. He has also been trained at the Teachers College Reading Institute at Columbia University.

"I’d like to acknowledge the entire leadership team and the elementary principal team,'' Brigg said. "You all have played a huge part in my life by way of being there and also pushing and encouraging me. I would also like to thank Dana and all of the MCPASD leadership, for their collaboration and continued support of me over the years. Their professional partnership, support, advice, and wisdom have been nothing but supportive and have helped me to become the person I am today.

"As a District, I hope that the community, Board, and staff all realize how blessed they are to have such an amazing group of passionate leaders that believe in each and every kid and staff member.  I am looking forward to starting this next chapter and embarking on a new, uncertain, yet exciting journey.''

He was named an outstanding African-American Educator in 2012.

"We appreciate Rainey's service and leadership and his focus on putting students first here and wish him all the success in the future,'' Superintendent Dana Monogue said. "Rainey will be an outstanding superintendent.''